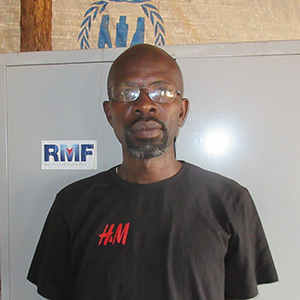 Sourur is a South Sudanese refugee working with RMF as an Interpreter. He is extremely talented with languages and understands more than 7 languages spoken in South Sudan. Because of the continued conflicts in South Sudan, Sourur fled to Kenya, where he acquired an education. He completed his high school studies at St. Peter Claver in Kenya. When he returned to South Sudan, he joined WAU University South Sudan and studied IT/business management. After training, he preferred self-employment, opening a hardware shop in Juba. When violence broke out in July 2017, his shop was vandalized and his wife was fatally shot. Sourur is living in Bidibidi Refugee Settlement with a broken heart.