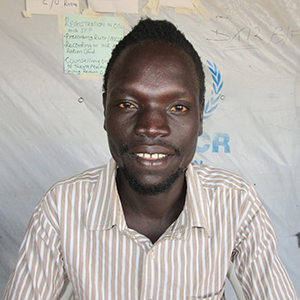 Sam Towongo attended Jigomoni Primary School in Juba, Sudan, from 2004 to 2010 (before the independence of South Sudan), and thereafter attended Yei Day Secondary School in Yei, South Sudan, completing his Ordinary Level studies in 2015. He then began working with Nile Breweries as a broker in Juba, and then in 2016 as a branch manager for Eagle Company. When war broke out in South Sudan, Sam fled to Uganda. In October 2016, he secured employment as an RMF Interpreter.

Sam is fluent in Arabic, Kakwa, English, Pojulu, Lugbara, and Kahili. He says, “My livelihood is now depending on the languages I speak.”