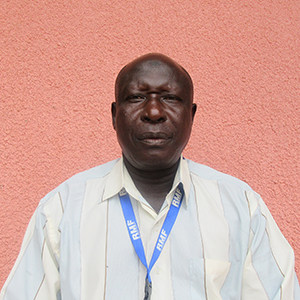 Nasuru completed his primary leaving examination (PLE) in 1977 at Palorinya Primary School in West Nile, Uganda. During those days, the insecurity in the country was at its peak, and this became an obstacle to Nasuru’s education. He dropped out of school and took a job as a security guard at the United Africa Enterprises in Yumbe. In addition, Nasuru operated a number of small businesses in Yumbe. In 2016, he joined RMF’s team and is in charging of guarding RMF’s Yumbe field office. Because of his rich experience in guarding, he provides technical advice to the security team.

During his free time, Nasuru likes reading newspapers, going to the gym, and running on a daily basis. He speaks English, Aringa, and Kiswahili.