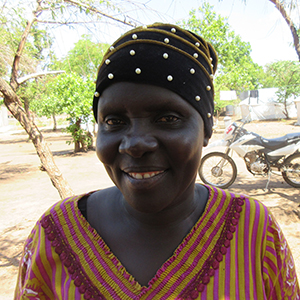 Medina Yusuf is an RMF Dispensary Nurse. She attended Layibi Central Primary School in Gulu in 1980 and then Aripea Secondary School in Terego until senior three, when she transferred to Aringa Secondary School, where she completed her Ordinary Level in 1984. In 1985 Medina was chosen by Save the Children and trained as a nursing aid at the Yumbe Resources Centre.

After completing her training as a nursing aid, Medina was employed by the Yumbe District local government, and she began working at Yumbe District Hospital as a nursing assistant. Medina was later transferred to Kulikulinga Health Centre III and then Midigo Health Centre IV. After seeking employment in South Sudan from 2010 until 2016, Medina resolved to return to Uganda due to the insecurity in South Sudan. In 2017, she joined Médecins Sans Frontières (MSF) at Igamara Health Centre III and was retained by Real Medicine Foundation during the transfer of management of the Igamara facility from MSF to RMF.

Medina is fluent in Arabic, English, Kakwa, Kiswahili, and Acholi.