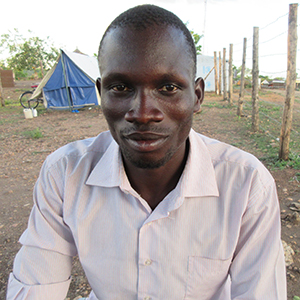 After completing his primary education in 2007 at Payawa Primary School in Yei, South Sudan, Lupai Martin completed his Ordinary Level studies at Yei Day Secondary School in 2011. He then came to Uganda to attend Ombaci Secondary School in Arua for his Advanced Level studies. In 2015, he proceeded to Makerere University, where he obtained a Certificate in Computer Technology. When war broke out in South Sudan in 2016, Lupai came to Bidibidi Refugee Settlement and began working with RMF as part of a Village Health Team (VHT). After displaying his potential, he was employed as an RMF Interpreter. At the health center, Lupai helps interpret Arabic and South Sudanese languages into English.