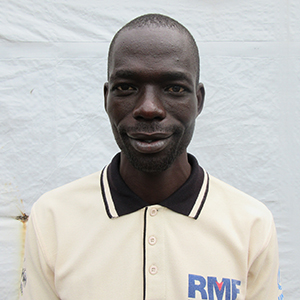 Jivison Apido completed his primary education at Lionga Primary School in Arua in 2003 and his Ordinary Level at Nile High Secondary School in 2008. He then received a Certificate in Catering and Hotel Management from Zobele Memorial Vocational Institute in Arua. Prior to joining RMF’s team, Jivison’s experience includes working with Planning Development and Rehabilitation under the NetsforLife project in Arua from 2009 to 2010; with Mayank Anti-Corruption Coalition (MACCO) as a community monitor in the Education, Health, and Water Sector in Arua in 2014; and with Bishop Federicas Yumbe Hotel as a waiter from 2015 to 2016. In mid-2016, Jivison secured employed with RMF in Bidibidi Refugee Settlement as a Sanitary Officer.