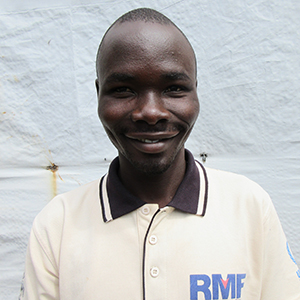 Jamal Atama completed his primary education at Kuru Primary School in Yumbe in 2009 and his Ordinary Level studies at Kuru Secondary School in 2013. Unable to continue his education due to several challenges, Jamal moved to Juba, South Sudan. He trained as a security guard with Warrior Security Limited, where he served from 2015 until 2016, when he was displaced by the conflict in South Sudan. In 2017, Jamal began working as an RMF Security Officer, and he is deployed at Iyete Health Centre III in Bidibidi Refugee Settlement.

Jamal enjoys listening to the news, reading newspapers, and watching football (American soccer). He is fluent in English, Lugbara, Arabic, and Madi.