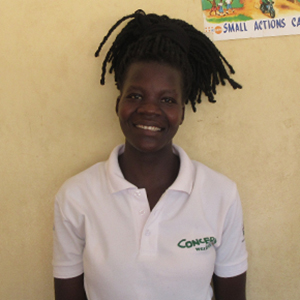 Christine holds a Certificate in Nursing from the Hoima School of Nursing and Midwifery, received in May 2015. Previously, she attended Lugazi East Day and Boarding Primary School and then Muni Girls’ Secondary School, where she completed both her Ordinary and Advanced Level studies. Christine’s nursing career started at Koboko Mission Health Centre III, where she worked until September 2016. Before joining RMF’s team, she also worked with Concern Worldwide and then Medical Teams International. Christine is now an Enrolled Nurse with RMF’s team in Bidibidi Refugee Settlement.

Christine is fluent in English, Lugbara, Luganda, and Kiswahili. She loves improving the health of disadvantaged and vulnerable people groups.