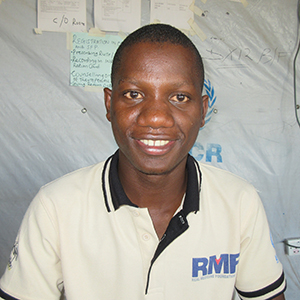 Charles Mulomi completed his primary education in 2002 at Nabiswa Primary School, Pallisa District, and his Ordinary Level in 2006 at Bugwere High School, Namirembe in Mbale. Charles then completed his Advanced Level at Bukoyo Secondary School, which gave him the ability to attend Kabale Institute of Health Sciences, where he obtained a Diploma in Clinical Medicine and Community Health in 2012. Charles began working as a clinician with Trinity General Clinic in Gayaza, Wakiso District from 2012 to 2015. In 2016, he joined RMF’s team as a Clinical Officer in Bidibidi Refugee Settlement.

Charles enjoys reading books, traveling to new places, and having fun with his family. In addition to English, he speaks Luganda and Lugwere.