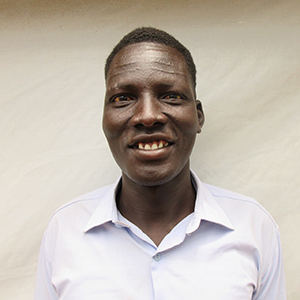 Bateah Puok Chan completed his primary education at Arua Primary School in 2010 and then attended secondary school at Standard College Arua from 2011 to 2014. He began working with the Danish Refugee Council in 2016 as a hygiene promoter, as well as a caregiver for the Transcultural Psychosocial Organisation (TPO) and a member of a Refugee Welfare Council. In 2017, he joined RMF’s team as an Interpreter in Bidibidi Refugee Settlement.

Bateah enjoys watching football (American soccer) and reading magazines. He is fluent in English, Nuer, Arabic, Lugbara, and Dinka, and this knowledge of various languages is the key basis for his employment with RMF.