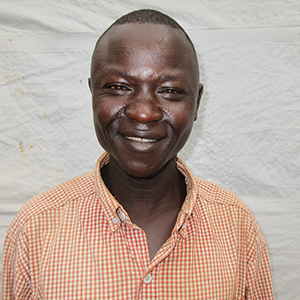 Anaku Manisuru attended Barakala Primary School in Yumbe, and after completing senior two at Barakala Secondary School in 2005, he stopped attending due to a lack of funds to pay school fees. Before joining RMF’s team as a Security Officer in 2016, Anaku worked as a watchman in Yumbe with both Pan-African Investment Limited in 2008 and United Africa Limited in 2015.

Anaku was the first Security Officer to join RMF’s team in Bidibidi Refugee Settlement. When RMF first arrived in Bidibidi with first-line supplies during the influx of South Sudanese refugees, the team had no security to keep watch over the items during the night. The area was overgrown, and it was a tough situation. The team was to function as the first clinic for the entire settlement the following day, when refugees were expected to begin arriving. When darkness set in, the team wondered if they could leave valuable property in the tent without a guard. A local boy presented Anaku to the team and assured them that he would keep the items safe throughout the night. The team decided to leave the items with Anaku, and upon returning the following morning, they found all the items safe and intact. From that day forward, Anaku became a team member in the position of Security Officer. His “interview” was simply his integrity and offering his services when the team needed someone to help.

Anaku enjoys listening to music and the radio, as well as watching and reading the news. He is fluent in English, Lugbara, Arabic, and Swahili.