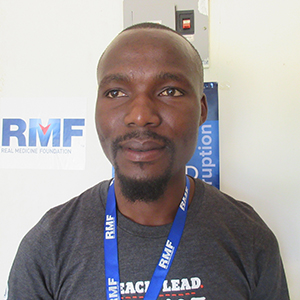 Allan holds a Diploma in Pharmacy Technology from Mulago Paramedical Schools, obtained in 2015. Prior to joining RMF, Allan worked with Uganda Cares as a pharmacy technician. He later moved to Soroti District Local Government and served in the logistics department. In July 2016, he transferred his services to Kampala and worked with several community pharmacies, including Pine Pharmacy, Aiveen Pharmacy, Loyal Pharmacy, Elton Pharmacy, and Life Pharmacy. In November 2016, he joined RMF as a Pharmacy Technician and is charged with the responsibility of managing the RMF-UNHCR established pharmacy in Bidibidi Refugee Settlement.