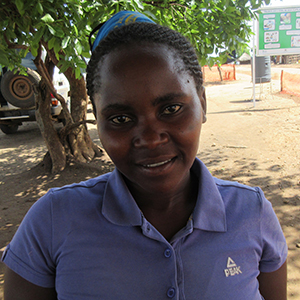 Aida Mwanamwolho completed her primary education at Ibanda Primary School in 2005 and completed her Ordinary Level studies at Celak Vocational Secondary School in 2010. Due to financial challenges, Aida was not able to pursue further education. She began working as a house helper in affluent homes until October 2017, when she joined RMF’s team as a Sanitary Officer.

Aida enjoys listening to music, watching movies, and playing netball. She is fluent in Lukonzo, Swahili, Lugbara, English, and Luganda.