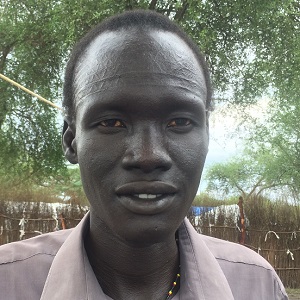 Pal is a South Sudanese national born in 1982 in Pajiek Payam of Ayod County, Jonglei State. Due to the prolonged civil war in the country, he could not go far with his education, but he did struggle to complete his primary eight studies. Later, he attended short courses such as advanced English and a computer course in Unity State, South Sudan. Before joining RMF’s team, Pal worked with several non-governmental organizations as a locally-recruited staff member: in 2014 he was a volunteer teacher with CMD (a local NGO), and in 2015, he worked with MSF as a drug dispenser for eight months. Pal joined Real Medicine Foundation in 2016 as a Hygiene Promoter based in Gorwai Primary Healthcare Centre.