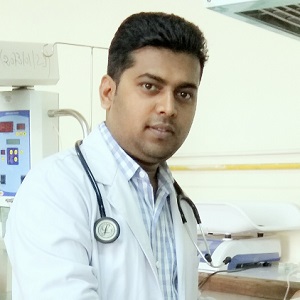 Dr. Shree Ram Prasad Shah is from the Saptari district of Nepal. He completed his schooling in India and later earned his MBBS degree at Zhengzhou University, Henan, China. With a zeal to serve his home country, Dr. Shah returned to Nepal and worked in numerous hospitals after completing his degree in 2009. He was awarded a scholarship for postgraduate studies by the China Scholarship Council in 2013, which allowed him to earn an MD in Pediatrics from the School of Medicine, Southeast University, Nanjing, China.

After completing his postgraduate work in China, Dr. Shah once more returned to Nepal to serve fellow citizens with his increased expertise. To better understand the clinical environment of children’s health in Nepal, he joined Kanti Children’s Hospital as a volunteer medical officer, and has been serving at the facility ever since. Dr. Shah also gained valuable experience working in the peripheral hospitals of Nepal, and now that his career is becoming more established, he is diligently working in the Neonatal Intensive Care Unit of Kanti Hospital as an RMF Medical Officer.