Elaine Fortin is putting her Master of Liberal Arts (ALM) in Information Technology to broad use. By day,

she is a software engineer at Harvard’s central administrative offices. In her spare time, she donates her skills to the Real Medicine Foundation, a humanitarian nongovernmental organization (NGO) that provides holistic medical support to communities around the world affected by natural disasters.

Elaine came into contact with the organization through her relief work in Southeast Asia. After the tsunami struck in December 2005, she was compelled to act. “The images on the television were just so heart wrenching,” she says. After realizing she had enough frequent flyer miles for a roundtrip flight to Sri Lanka, she connected with the NGO Volunteers Sri Lanka. For a month she worked in various camps throughout the devastated region, designing a central database for the NGO and setting up a communications center, among other tasks.

The amount of damage was unsettling, she says: “You’d go through these areas where it was just waves of total destruction and there were these tent cities, these camps one after another in the middle of fields of rock. It was like walking through a ghost area.”

It is work, however, for which Elaine is well suited. And her discovery of the Real Medicine Foundation during her time in the Powerloom Factory Camp, one of the neediest camps in the Tangalle region, was integral to her ongoing involvement in relief work today. The foundation, still in its nascent stages, was setting up a clinic near the abandoned and refitted factory that sheltered 26 families. There, Elaine met Dr. Martina Fuchs, Real Medicine’s founder.

Like Elaine, Dr. Fuchs, a physician schooled in pediatric psychiatry and alternative healing techniques, had been drawn to volunteer in the region by the images she saw on the news. According to Dr. Fuchs, the clinic was overflowing from the beginning. “We listened to the suffering of one human being after another living in crowded camps, with nothing but the clothes on their backs,” she says, “with no food, no plumbing, no shelter, and no idea what the future would bring. We listened and then we promised.”

Elaine was drawn to the foundation’s dedication to providing aid in the form of surgery, antibiotics, immunizations, and compassion to 1,000 families in the region.

Since her return to Boston, she’s helped Real Medicine expand its reach. She raises funds, maintains 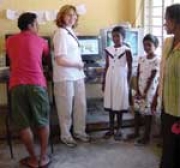 the foundation’s website, and networks locally to broaden the resources available to Real Medicine. In the past year in Sri Lanka alone, the foundation has helped fund a textile school for the women, lifelong growth hormone medication for two children, and heart surgery for another child. The foundation is currently organizing a group of surgeons to perform more life-saving operations in Sri Lanka; there are also plans for the establishment of a grammar school in an area where none has existed.

Elaine has maintained contact with people from the Powerloom Camp, with the help of a translator she found through MIT. She happily reports that one year later, all families at Powerloom have moved into permanent housing. The old factory now lies empty.

Real Medicine is using its work in Sri Lanka as a model for other areas affected by disaster, war, or poverty. The foundation is setting up self-sufficient clinics and other health-related services in Sri Lanka, India, Pakistan, Mozambique, and the US Gulf Coast.

Elaine plans to return to Sri Lanka with Dr. Fuchs within the year. Until then, she ensures the memories of her relief work are present in her day-to-day life. “You try to keep what you’ve gained within your new experience,” she says. “The value of love, life, health, and hope are higher on my priority list than before. I guess I do feel that [when you reach out like this] you grow better as a human being, that the purpose of life has more value. It’s working with Real Medicine that’s allowed me to keep that alive.”