The following is an article which appeared in the Palisades Post. Also, here is a photo of Jade with a toy she sent to a little girl in Sri Lanka. Following it is a thank you note from the child, as well as two photos of her with the toy in Sri Lanka.

It is almost impossible to imagine the scene of the tsunami that hit Southeast Asia last December 26. The chaos that unfolded was inconceivable, and the rebuilding projects are still in the beginning stages, seven months later.

After learning about the orphans, the homeless and the unemployed people who were greatly affected by the tsunami, 8-year-old Jade Brenner-Katz knew that she needed to do her part.

"I'm lucky to have a great life and I want to help kids who don't have as much as I do," Jade said. She wanted to send toys, stuffed animals and clothes to the children who had to go through this traumatic experience, hoping to bring a little light into their lives and let them know that she cared.'

Jade's mother, Lauren Brenner-Katz, searched for ways in which Jade could get these items overseas and to those who lived in an area that needed a great amount of aid. Jade wanted to make sure that what she sent actually reached children in need rather than be lost in storage or barred from entering the country.

As Lauren's search continued for several months, she met Dr. Martina Fuchs, a pediatrician who had already traveled to Sri Lanka once to help the victims deal with their experience and with their health problems.'Lauren and Dr. Fuchs met through a Buddhist meeting, and Dr. Fuchs agreed to bring the collected items and personally hand them out to children in need. '

Jade wanted to collect as much as she could for Dr. Fuchs, so Lauren sent out notices through her homeschooling community. Dr. Fuchs took the 300 collected stuffed animals, toys and clothing from Jade, and packed them into five suitcases to take with her to Sri Lanka. But she was told she was allowed to bring only four suitcases, and would have to leave one behind, or put it into storage.'Dr. Fuchs was determined to get everything that Jade gave her through, and told the Singapore Airlines workers that she would not leave the United States without the extra luggage.'Her intention was so clear that they allowed her the extra bag, and she was able to bring every toy with her.

Once Dr. Fuchs arrived in Sri Lanka, she joined with fellow unpaid volunteers from countries such as England, Australia and Germany to set up a children's clinic within a week. As a doctor with a Ph.D. in pediatric psychiatry, Dr. Fuchs gathered children who needed medical attention or help dealing with their experience, and had them draw pictures of what they saw the day the tsunami hit.'Many children gathered and created their own interpretation of what occurred, and in return, Dr. Fuchs handed out the toys, clothes, and stuffed animals from Jade. Once she did this, Dr. Fuchs saw children smiling and playing for the first time since her arrival. She saw the effect that a young girl with a big idea had and the impact it created. Dr. Fuchs made sure that the pink Converse tennis shoes that Jade had so graciously given away with the pile of goods reached a young girl in great need.

Jade wanted to adopt a child to whom she could send money and toys to every month, and Dr. Fuchs found a young girl for her: Nimasha Madhuwanthi. The 3-year-old, who lives with four siblings and her two parents, lost her home and most of her belongings in the tsunami. Now Jade is excited and focused on sending over toys and clothing to her "little sister."

Cash donations can be made through the Real Medicine Foundation Web site: www.realmedicinefoundation.org

On behalf of Nimasha Madhuanthi, I'd like to thank you. She was smiling and so happy when she 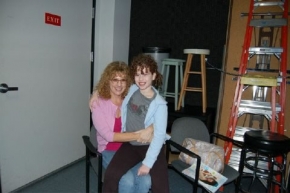 received your stuffed animal. She told me about how she ran from the waves and was able to escape the Tsunami. She also told me about how difficult it was at the camps where they stayed for a very long time. Her mother told me that she nearly died from getting sick with Denghe (a virus you get from mosquitoes) which she got when she was in the camp. She escaped one more time… and now she is happy and playing all the time. Her family is now staying in rented shack, and will have to find a home soon. She hopes to some day have a home again. She wanted me to tell you that she was born on the 3rd of June in 2002. She is really so happy to receive your gift.

Thanks so much,
Subha (Nimasha's Friend) 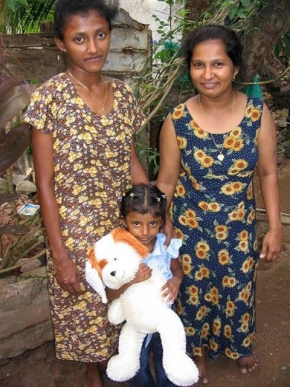 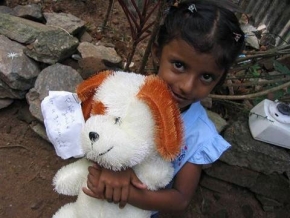